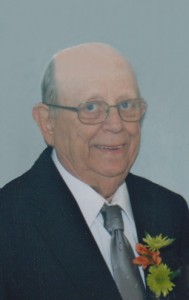 Frank (Frankie) Phillis entered the United States Army on December 3, 1956, in Bloomfield, IA, served during the Peacetime era and reached the rank of Specialist Four before being discharged on December 4, 1958 in Fort Leonard Wood, MO.

Frank (Frankie) Phillis is buried at Fairview Cemetery in Denver, Iowa and can be located at

Frankie was born on July 10, 1934, in Moline, Illinois, the son of Frank N. and Lennie (Ickes) Phillis. He graduated from Pulaski High School in 1952. He was united in marriage to Wanda Rae Haars on June 10, 1956, at the United Methodist Church in Pulaski, Iowa. After their marriage, Frankie entered the United States Army in November and they were stationed in Germany. He was honorably discharged in November of 1958. Frankie worked for John Deere for 39 years, retiring on April 30, 1992. In his spare time, he enjoyed fishing and watching his grandchildren playing sports. He loved the time he spent at their cabin near Independence. He always could be found scratching a lottery ticket.

He is survived by his wife, Wanda Phillis of Denver, Iowa; a daughter, Sue (Ron) Wooldrik of Denver, Iowa; a son Tony Phillis of North Richland Hill, Texas; and a daughter, Sandy (Mark) Cranford of Mustang, Oklahoma; four grandchildren, Jason (Brooke) Wooldrik, Jenny (Travis) Brustkern, Ben Phillis and Will Cranford; a great granddaughter, Everly Rae Brustkern; and a brother, Don (Jan) Phillis of Phoenix, Arizona. He was preceded in death by his parents.

Funeral services will be held at 10:30 a.m. on Thursday, August 6, 2015, at St. Paul United Church of Christ in Denver with Pastor Craig Henderson officiating. Burial will be held in Fairview Cemetery, Denver. Military Rites at the grave will be given by the Acker Matthias American Legion Post #653 of Denver. Visitation will be held on Wednesday from 5:00 p.m. to 7:00 p.m. at the Kaiser-Corson Funeral Home in Denver. Memorials may be directed to the Tripoli Nursing and Rehab or to the St. Paul United Church of Christ, Denver. Online condolences may be left at www.kaisercorson.com

Kaiser-Corson Funeral Home in Denver is assisting the family. 319-984-5379 – See more at: http://www.kaisercorson.com/obituary/Frankie-Phillis/Denver-IA/1533528#sthash.6TE17ske.dpuf