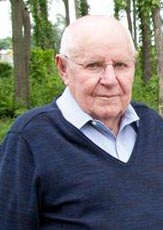 Forrest Carrol Bolte entered the United States Army on December 1, 1944, in Fort Snelling, MN, served during the World War II era and reached the rank of Private First Class before being discharged on October 25, 1946 in Fort Sheridan, IL.

Forrest Carrol Bolte is buried at Faith United Church of Christ in Tripoli, Iowa and can be located at

Funeral services will be held at Faith United Church of Christ in Tripoli on Monday, January 23, 2017 at 11:00 a.m. with Rev. Marilyn Sargent officiating. There will be a private inurnment at the church cemetery. Memorials may be directed to the family to be designated to a charity of their choice at a later date. Rettig Funeral Home in Tripoli is assisting the family.

Forrest Carrol Bolte was born on September 3, 1926 to Herman and Lizzie (Wasserfort) Bolte in rural Black Hawk County. He was baptized at Mt Hope Church on July 15, 1928. The family later moved to rural Tripoli where Forrest attended school. He was confirmed on April 12, 1954 at the age of 27.

He enlisted in the US Army on December 1, 1944 and was stationed in Korea and the Philippines. He was a life-time member of the VFW and participated in an Honor Flight in 2012.

Forrest was an active member of Faith United Church of Christ in Tripoli where he served on the church council. He was a member of the Wapsie Sportsman’s Club and the Tripoli Fire Department. He retired from John Deere in 1983 after 30 years of service.

Forrest married Glenyce (Hartman) Boeckmann on April 27, 1984 at the Little Brown Church in Nashua. They made their home in Tripoli until moving to Vinton to be closer to family in 2007. He faithfully attended Blessed Hope Church in Vinton when his health allowed it.

He was preceded in death by his parents, brothers Ralph, Clarence and Bernard, sisters Thelma and Lanora, son Joel Boeckmann and granddaughter Cara Boeckmann.

He is survived by his wife, Glenyce, of Vinton, sister Vernitta Sievers of Waterloo, daughter Lori Meyer of Evansdale, son Tom (Lisa) Boeckmann of Vinton, five grandchildren and six great-grandchildren.

The family would like to give special thanks to the staff at Virginia Gay Hospital and Hospice of Mercy.