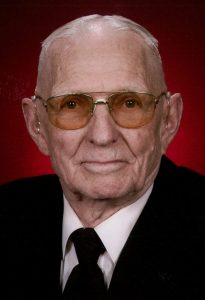 entered the United States Army on September 17, 1942, in Camp Dodge, IA, served during the World War II era and reached the rank of Sergeant before being discharged on November 14, 1945 in Jefferson Barracks, MO.

is buried at St. Paul Lutheran Cemetery in Readlyn, Iowa and can be located at

Ernest “Ernie” H. Poock, 97, of Readlyn, died Friday, April 6, 2018, surrounded by his family at his granddaughter’s home in Readlyn.

Ernest was born July 12, 1920, in Waverly, Iowa, the son of Henry and Lydia (Warneke) Poock. He was baptized August 1, 1920 and confirmed March 25, 1934, both at St. Paul’s Lutheran Church in Readlyn. He attended country school through the 8th grade. On August 23, 1942, he was united in marriage to Maxine Watts at St. Paul’s Lutheran Church. He served in the United States Army during World War II and was honorably discharged in 1945. After returning from the war, he and Maxine would farm together until retirement in 1986. They then moved into Readlyn. Maxine passed away June 22, 2007, and Ernest continued living in Readlyn.

Ernest was a lifelong member of St. Paul’s Lutheran Church in Readlyn. He enjoyed listening to and performing music, especially on the piano or organ. In retirement, he was an avid and accomplished woodworker, many of his pieces can be seen on display in local churches, businesses and homes. Above all, he cherished the time that he spent with his family.

Kaiser-Corson Funeral Home in Readlyn is in charge of arrangements. 319-279-3551