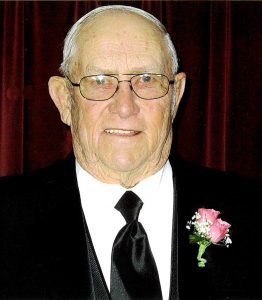 Eldon Eugene Kratchmer entered the United States Army on January 7, 1952, in Des Moines, IA, served during the Korean War era and reached the rank of Sergeant before being discharged on October 7, 1953 in Camp Carson, CO.

Eldon Eugene Kratchmer is buried at Harlington Cemetery in Waverly, Iowa and can be located at

Eldon was born on March 22, 1930, on the family farm in Butler County, Iowa, the son of Martin L. and Edna P. (Wright) Kratchmer. Eldon was baptized at the United Methodist Church in Waverly, Iowa. He attended country school at Butler #9 rural Clarksville, Iowa, and graduated in 1948 from the Waverly High School. Following his schooling he helped his parents on the farm and on January 7, 1952, he entered the U.S. Army and served during the Korean War. In June of 1952, he was wounded while serving with the 176th Armored Artillery and received the Purple Heart. He was honorably discharged on October 7, 1953 and returned to Waverly where he went to work for Carnation Dairy and also continued to farm. On March 20, 1955, Eldon was united in marriage to Joan I. Juhl at the United Methodist Church in Nashua. To this union two children were born, Keith and Kelly. The couple later divorced in 1988. Eldon farmed his entire working life and also worked at Standard Oil as a Route Salesman and was an insurance agent for 30 years with Danish Mutual Insurance Company, retiring in 2006.

Eldon was a member of Trinity United Methodist Church in Waverly. He was a lifetime member of the Amvets Post #79 and Farm Bureau. He had a very strong, independent German personality, and was extremely hardworking. He loved being outside and on his John Deere tractor. He took great pride in mowing his large lawn last summer, and rode in the combine while harvesting crops on his farm last fall. In his spare time, he enjoyed fishing, and woodworking, but most of all, spending time with his family, especially his grandkids.

Funeral services will be held at 10:30 a.m. on Saturday, March 9, 2019, at Trinity United Methodist Church in Waverly, with Pastor Carolyn Bowers officiating. Burial will follow in Harlington Cemetery in Waverly, with military graveside rites conducted by the Waverly Area Veterans Group Honor Guard. Public visitation will be held on Friday, March 8, 2019 from 5:00 to 8:00 p.m. at Kaiser-Corson Funeral Home in Waverly and also for an hour prior to services at the church on Saturday. Memorials may be directed to the family for later designation. Online condolences for Eldon’s family may be left at www.kaisercorson.com. Kaiser-Corson Funeral Home in Waverly is assisting the family. 319-352-1187