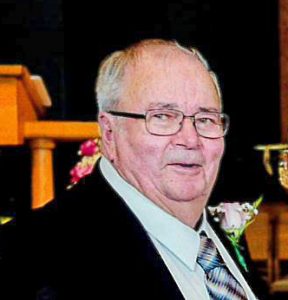 Eldean Herman Mueller entered the United States Army on November 4, 1958, in Waverly, IA, served during the Peacetime era and reached the rank of Specialist 4 before being discharged on October 24, 1960 in Fort Hamilton, NY.

Eldean Herman Mueller is buried at St. John's United Church of Christ - Siegel in Waverly, Iowa and can be located at

Eldean was born on March 28, 1936, on the family farm in rural Bremer County, Iowa, the son of Herman and Leona (Bergmann) Mueller. He attended Douglas #5 country school to the eight grade and then Frederika High School graduating in 1955. Eldean then served in the United States Army from 1958 to 1961. On July 22, 1962, Eldean was united in marriage to Myrna Jacobs at St. John’s Lutheran Church in Clarksville, Iowa. The couple would spend their lives farming together in rural Plainfield, Iowa. Besides farming Eldean also worked for Mueller Mobile Milling, hauled milk for Farmers Butter and Dairy in Fredericksburg, Iowa, and for Terex Crane in Waverly where he retired.

Eldean was a lifetime member of St. John’s United Church of Christ-Siegel rural Waverly, Iowa, where he was baptized on April 19, 1936 and confirmed on April 2, 1950. He enjoyed farming, Iowa Hawkeye Sports, going to auctions, and restoring pedal tractors, however, what Eldean enjoyed most was time with his family, especially his grandchildren.

Visitation will be held on Sunday, May 7th, at the Kaiser-Corson Funeral Home in Waverly, where the family will greet friends from 4 to 7 p.m. Funeral services will be held at 10:30 a.m. on Monday, May 8th, at St. John’s United Church of Christ-Siegel, rural Waverly, Iowa. Burial will follow in the church cemetery with Waverly Area Veterans giving honors. Memorials may be directed to Eldean’s family and online condolences may be left at www.kaiser-corson.com.