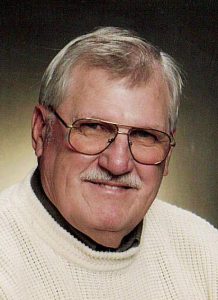 Duane Truman Huisman entered the United States Air Force on July 25, 1956, in TBD, served during the Peacetime era and reached the rank of before being discharged on July 24, 1960 in TDB.

Duane Truman Huisman is buried at Harlington Cemetery in Waverly, Iowa and can be located at

Duane was born November 3, 1936, in Wellsburg, Iowa, the son of Harm and Rena (Weichers) Huisman. He was baptized in Ely, Iowa in 1941 and confirmed in Buffalo Center in 1950. He graduated from Buffalo Center High School in 1955. He served in the United States Air Force from 1956 until his honorable discharge in 1960. On August 21, 1960, he was united in marriage to Betty Gordon in Kensett, Iowa. He worked for Fred’s Super Value, Sears Roebuck, Teleconnect Directory Service, KXEL Radio, KWAY Radio and Spahn and Rose.

Duane was a member of AMVETS and Redeemer Lutheran Church in Waverly. In his free time, he enjoyed playing golf, woodworking and furniture building. Above all, he enjoyed spending time with his family especially his grandchildren.

Funeral Services will be held at 1:00 p.m. on Thursday, May 24, 2018, at Redeemer Lutheran Church with Pastor Corey Smith officiating. Military Rites will be performed at the church following the service by the Waverly Area Honor Guard. Visitation will be held from 5:00 p.m. to 7:00 p.m. on Wednesday, May 23, at the Kaiser-Corson Funeral Home in Waverly and for an hour prior to services at the church on Thursday. Following services, Duane’s body will be cremated, and a private burial of cremated remains will be held at Harlington Cemetery in Waverly. Memorials may be directed to Waverly Area Veterans Post or Juvenile Diabetes Research Foundation. On-line condolences may be left at www.kaisercorson.com.