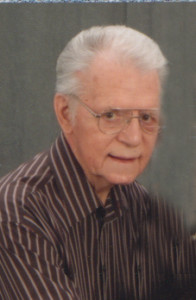 Duane Carl Harms entered the United States Army on February 14, 1952, in Des Moines, IA, served during the Korean War era and reached the rank of Sergeant (T) before being discharged on November 13, 1953 in Camp Carson, CO.

Duane Carl Harms is buried at St. Peter Lutheran in Denver, IA, Iowa and can be located at

Duane was born on August 5, 1931, in St. Paul, Minnesota, the son of William and Carrie (Bachman) Harms. He was baptized and confirmed in the Lutheran faith and graduated from the Elma High School. On July 28, 1952, Duane was united in marriage to Verna Maseman at St. Peter Lutheran Church in Elma, Iowa. On August 11, 1952, Duane entered the U.S. Army and served during the Korean War until October 1953, when he was honorably discharged. Following his service, Duane and Verna moved to Kansas City, then to Waukon, Iowa, where he worked for his dad in his butcher shop. The couple then moved to West Union and Duane worked for Kleen Maid Bread, driving bread truck in northeast Iowa. He took a home course thru DeVry in electronics, hoping to find a job in Arizona. Unable to find work without experience, he went to barber school in Phoenix, Arizona, and worked as a barber in the barber college for a short time. After school was completed in 1963, the family moved to Denver, Iowa, where Duane worked as an apprentice at Piehl’s Barber Shop with Burton. In 1965, Duane rented his own shop in Denver, where he was a barber for over 48 years, retiring in 2011.

Duane was an active member of St. Peter Lutheran Church in Denver, where he had served on the church council. He had a quick wit and enjoyed teasing his children. He also enjoyed playing ping pong with his children and also enjoyed golfing, fishing and working on crossword puzzles.

Funeral services will be held on Saturday, January 24, 2014, at 1:00 p.m. at St. Peter Lutheran Church in Denver, with Pastor Ron Mathews officiating. Burial will be in St. Peter Lutheran Cemetery in Denver, with military graveside rites conducted by the Acker-Matthias American Legion Post # 653. Public visitation will be held on Friday, January 23rd from 5:00 p.m. until 7:00 p.m. at the Kaiser-Corson Funeral Home in Denver. Memorials may be directed to the Duane Harms family. Online condolences for Duane’s family may be left at www.kaisercorson.com.