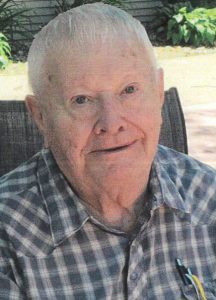 Donald William Leisinger entered the United States Army on January 10, 1946, in Fort Snelling, MN, served during the World War II era and reached the rank of Technician Fifth Grade before being discharged on March 22, 1947 in Fort Sheridan, IL.

Donald William Leisinger is buried at St. Paul's Lutheran Cemetery in Waverly, Iowa and can be located at

Don was born September 23, 1927, in Waverly, Iowa, the son of Gustav and Marie (Mueller) Leisinger. He was baptized and confirmed in Waverly. Don attended St. Paul’s Lutheran School and Waverly High School, both in Waverly. He entered the United States Army on January 10, 1946 and served in the Philippines. His honorable discharge came on March 22, 1947. On January 15, 1950, he was united in marriage to Wanda Lageschulte at Faith United Brethren Church in Waverly. The couple made their home in Waverly where Don would own and operate Niewohner Hardware for 30 years. He then worked at GMT in Waverly until his retirement.

Don was a longtime member of St. Paul’s Lutheran Church in Waverly where he served as Elder on the church council and chairperson of the Christian/Lutheran School. He served as Commander of the Waverly Amvets and was a member of the State Rose Society. He was very active as a Cub Scout Master, proudly seeing his sons through to the rank of Eagle Scout. He also enjoyed attending his sons’ school activities and going on family camping trips. Working on his acreage was one of his top past times.

Funeral Services will be held at 10:00 a.m. on Saturday, April 20, 2019, at St. Paul’s Lutheran Church and School in Waverly with Pastor Arthur Bergren officiating. Burial with military honors conducted by the Waverly Area Veterans Honor Guard will follow in the St. Paul’s Lutheran Cemetery, Waverly. Visitation will be held from 4 p.m. to 7 p.m. on Friday, April 19, 2019, at the Kaiser-Corson Funeral Home in Waverly and for an hour prior to services at the church on Saturday. Memorials may be directed to St. Paul’s Lutheran Church and School and on-line condolences may be left at www.kaisercorson.com.