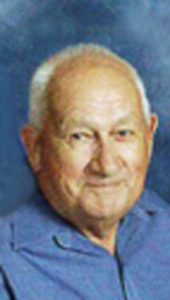 Donald George Dietz entered the United States Army on June 5, 1953, in Des Moines, IA, served during the Korean War era and reached the rank of Private First Class before being discharged on April 27, 1955 in Fort Sheridan, IL.

Donald George Dietz is buried at Horton Cemetery in Waverly, Iowa and can be located at

Donald G. Dietz, 86, of Waverly, Iowa passed away on Thursday, January 10, 2019 at the Waverly Health Center in Waverly.

Donald George Dietz was born on May 26, 1932, the son of Lewis Lyle and Mildred Lucille (White) Dietz in Plainfield, Iowa. He attended school in the Plainfield area. On February 15, 1953, he was united in marriage to Marjorie Ann Hirsch at St. John’s Lutheran Church in Nashua, Iowa. He entered the Army on June 5, 1953, serving during the Korean Conflict until his discharge on April 27, 1955. Don worked for the City of Waverly for 40 years and following his retirement he worked at Croell Redi-Mix for 10 years. He also had numerous other jobs including hauling milk and helping farmers.

He was a member of Redeemer Lutheran Church in Waverly, Amvets, VFW and the American Legion. He enjoyed doing woodworking, collecting Case tractors, watching “Old time Westerns, going to Antique Acres, but most especially spending time with his grandchildren and great grandchildren.

Funeral services will be held on Wednesday, January 16, 2019 at 10:30 am at Redeemer Lutheran Church in Waverly with Pastor Corey Smith officiating. Burial will follow in Horton Cemetery with Military rites by the Waverly Area Veterans Honor Guard. Visitation will be held on Tuesday from 4:00 pm until 7:00 pm at the Kaiser-Corson Funeral Home in Waverly and also an hour prior to the service on Wednesday at the church. Memorials may be directed to Dietz family for a later designation and online condolences for Donald Dietz may be left at www.kaisercorson.com.

Kaiser-Corson Funeral Home is assisting the Dietz family with arrangements. 319-352-1187