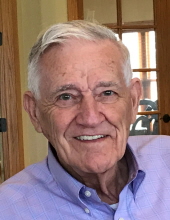 Donald Gene Meinen entered the United States Army on September 17, 1951, in Chicago, IL, served during the Korean War era and reached the rank of Corporal before being discharged on August 25, 1953 in Camp Carson, CO.

Donald Gene Meinen is buried at Harlington Cemetery in Waverly, Iowa and can be located at

Don was born on August 4, 1930, in Pekin, Illinois, the son of Harm and Nellie (Hardman) Meinen. He was raised in Pekin and graduated from the Pekin High School. Don then entered the United States Army and served in the Korean War. On September 22, 1957, Don was united in marriage to LaVone Puterbaugh at the First Christian Church in Pekin. During his life he worked for Central Illinois Light Company, as Director for Pekin Park District, and as Director for Tri-County Riverfront Forum.

Don was a member of Grace Presbyterian Church in Peoria, Illinois, Rotary, and served on the Salvation Army Board of Directors. Don also served his community as a City Commissioner in Pekin, Illinois. His greatest enjoyment in life was time spent with his family, especially his grandchildren. He also liked to work in his yard, sing hymns, and study his Bible.

Visitation will be held on Monday, October 21, from 9:00 to 10:00 a.m. at Kaiser-Corson Funeral Home in Waverly, Iowa. Graveside Funeral Services will be at 10:30 a.m. on Monday, October 21, at Harlington Cemetery in Waverly, Iowa. Memorials may be directed to Salvation Army and online condolences may be left at www.kaisercorson.com. Kaiser-Corson Funeral Home in Waverly is assisting the family with arrangements 319-352-1187.