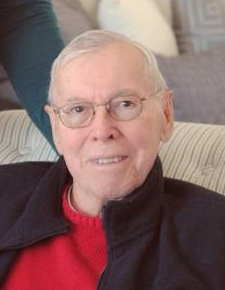 Donald Eugene Buck entered the United States Army on January 20, 1953, in Des Moines, IA, served during the Korean War era and reached the rank of Sergeant before being discharged on December 31, 1954 in Fort Carson, CO.

Donald Eugene Buck is buried at Fairview Cemetery in Denver, Iowa and can be located at

Don was born September 26, 1932, in Mt. Ayr, Iowa. He attended Lonesome Hollow Country School in Ringgold County, Iowa and then graduated from Mt. Ayr High School. He served his country honorably in the United States Army during the Korean War, and was discharged in 1953. On January 11, 1957, he was united in marriage to Sandra Jo Burge in the Morningside Chapel in Waterloo, Iowa. He was employed with Walnut Dairy in Waterloo, Carnation in Waverly and retired from John Deere on February 28, 1995, after 28 years of service.

Don was a longtime member of Saint Paul United Church of Christ in Denver. He enjoyed playing golf and cheering on his favorite sports teams; the Chicago Cubs and the Iowa Hawkeyes. He also enjoyed playing cards, fishing, and family trips. Above all, he was a family man and cherished the time he spent with his children, grandchildren and great grandchildren.

Funeral Services will be held at 11:00 a.m. on Saturday, March 18, 2017, at Saint Paul United Church of Christ in Denver with Rev. Craig Henderson officiating. Burial with Military Rites by Acker-Matthias American Legion Post #653 will be conducted in the Fairview Cemetery in Denver. Visitation will be held from 4 p.m. to 7 p.m. on Friday, March 17, at the Kaiser-Corson Funeral Home in Denver and for an hour prior to services at the church on Saturday. Memorials may be directed to Saint Paul United Church of Christ or Acker-Matthias American Legion Post #653, both in Denver. On-line condolences may be left at www.kaisercorson.com.