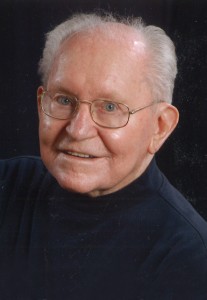 Donald Edward Koehn entered the United States Army on March 20, 1943, in Urbana, IL, served during the World War II era and reached the rank of Technician Third Grade before being discharged on April 29, 1946 in Camp McCoy, WI.

Donald Edward Koehn is buried at Harlington Cemetery in Waverly, IA, Iowa and can be located at

Don was born on December 11, 1923, in Lansing, Illinois, the son of Edward and Martha (Dockweiler) Koehn. He was baptized at Trinity Lutheran Church, Lansing, and confirmed in 1937 at the same church. Don attended the Trinity Lutheran Parochial one room school house through the 8th grade. He then attended the Thornton Fractional Township High School, Calumet, Illinois, where he played football, ran track, played trumpet in the school band, served as drill master for the marching band, and where he graduated Valedictorian of his 1941 class. Don received an academic scholarship to attend the University of Illinois, where he studied for the next year and a half before entering the US Army during WWII. Following his honorable discharge on April 29, 1946, he returned to Illinois and enrolled at Valparaiso University, where he played football and baseball. Don holds a batting title and the Valparaiso record for the longest kickoff return. Don graduated from Valparaiso on June 20, 1948, and that same day he was united in marriage to his college sweetheart, Natalee Oltmann. The couple made their home in Lansing, Illinois, where Don began his career in the life insurance profession with Metropolitan Life. In 1951, he was transferred to Toledo, Ohio. In 1953, he began working for Lutheran Mutual Life Insurance Company in Davenport, Iowa. In 1958, Don was transferred to Minneapolis to develop a field sales organization for the State of Minnesota. In 1960, he accepted the challenge of Regional Vice President for the states of North and South Dakota, Minnesota and Wisconsin. Natalee died in 1963, following a brave battle with cancer. On February 27, 1965, he married Shirley J. Janssen in Minneapolis. In August of 1973, Don and Shirley moved to Waverly, where Don became the Vice President of Agency Development for Lutheran Mutual/Century Companies (now known as CUNA), a position he held until his retirement on October 1, 1986.

Don was a faithful and active member of St. John Lutheran Church in Waverly. Don received his volunteer training in 1986 with Cedar Valley Hospice, where he was named Volunteer of the Year in 2003. He loved the game of golf, playing cards of all kinds, playing tennis, fishing, traveling and being a part of his family and their lives. Don loved his family, God, Country and Community and has always tried to serve all to the best of his ability. Don loved people and has always enjoyed sharing his faith with others.

Funeral services will be held on Monday, July 6, 2015 at 10:30 am at St. John Lutheran Church in Waverly, with Pastor Matthew Versemann officiating. Burial will be in Harlington Cemetery in Waverly, with military graveside rites conducted by the Waverly Area Veterans Honor Guard. Public visitation will be held on Sunday from 4:00 pm to 7:00 pm at the Kaiser-Corson Funeral Home in Waverly and also for an hour prior to services on Monday at the church. Memorials may be directed to St. John Lutheran Church or Cedar Valley Hospice. Online condolences for Don’s family may be left at www.kaisercorson.com. Kaiser-Corson Funeral Home in Waverly is assisting the family. 319-352-1187. – See more at: http://www.kaisercorson.com/obituary/Donald-Edward-Killer-Koehn/Waverly-IA/1523361#sthash.FkMOLdNT.dpuf