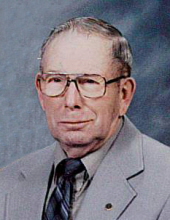 Donald Dean McEnany entered the United States Army on January 7, 1952, in Des Moines, IA, served during the Korean War era and reached the rank of Sergeant before being discharged on October 7, 1953 in Camp Carson, CO.

Donald Dean McEnany is buried at Harlington Cemetery in Waverly, Iowa and can be located at

Don was born on April 20, 1930, in Parkersburg, Iowa, the son of Patrick Miles and Mabel Anne (Brocka) McEnany. Don was baptized on July 20, 1930, in Clarksville, Iowa, and later was confirmed in Parkersburg, Iowa. He attended country school through 1944 and attended the Shell Rock High School graduating in 1948. Don worked at Renning Hardware Store after high school and the Marshall Canning Company in Waverly. On January 7, 1952, Don entered the U.S. Army where he served during the Korean War and was a Sergeant in the 7th Infantry 3rd Division. On January 9, 1954, he was united in marriage to Virginia Ann Johnson at St. Columbkille’s Church in Varina Iowa. The couple made their home on a farm south of Shell Rock, where Don farmed from 1954 until he retired in August of 1996. Don worked at B & B Oil Coop in Waverly from 1979 until 1992. The couple remained on the farm until moving to Waverly in June of 2009.

Don was a faithful member of St. Mary Catholic Church in Waverly. He was a member of the VFW in Waverly and the Shell Rock American Legion Post since 1954, where he held the office of Post Adjutant. He was the last surviving member of the “Over the Hill Gang”from in Shell Rock. Don loved to play cards, dominoes, read and garden. He spent a lot of time in his workshop making wooden items for the family. He enjoyed traveling with Virginia to Canada, Nova Scotia, throughout the U.S and parts of Mexico. The couples spent several winter months in Mission, Texas with family and friends.

Don is survived by his wife and best friend of 66 years, Virginia McEnany of Waverly; two daughters, LaDonna (Larry) Pagel of Cedar Falls; Patti (Tim) Marquart of Waterloo; two sons, Craig (Lisa) McEnany of Nevada; and Kevin (Becky) McEnany of Floyd; thirteen grandchildren and nine great grandchildren; a sister-n-law, Lavon McEnany of Waverly and her daughter, Anita (McEnany) Wiebke of Cedar Falls; and several great nieces and nephews. He was preceded in death by his parents; nephews, Mark McEnany and Dean Wiebke; a niece Loretta (McEnany) Boswell; and his brother Loren McEnany.

Mass of Christion Burial will be held at 10:30 a.m. on Saturday, February 8, 2020, at St. Mary Catholic Church in Waverly with Father David Ambrosy officiating. Burial will be held in Harlington Cemetery in Waverly, with military honors conducted by the Waverly Area Veteran Honor Guard. Visitation will be held from 4:00 p.m. to 7:00 p.m. on Friday at the Kaiser-Corson Funeral Home in Waverly, where there will be a 7:00 p.m. Scripture Service. Visitation will also be held an hour prior to services on Saturday at the church. Memorials may be directed to the Cedar Valley Hospice or to the family. Online condolences may be left at www.kaisercorson.com