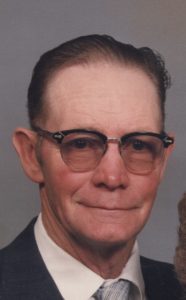 Donald Cornelious Rader entered the United States Army on December 5, 1951, in Des Moines, IA, served during the Korean War era and reached the rank of Private First Class before being discharged on November 12, 1953 in Camp Carson, CO.

Donald Cornelious Rader is buried at Mt. Calvary Cemetery in Sumner, Iowa and can be located at

Mass of Christian Burial will be held 10:30 a.m. Thursday, October 5, 2017, at Immaculate Conception Catholic Church in Sumner with Rev. Don Komboh celebrating the Mass. Interment will follow at Mt. Calvary Cemetery with Military Rites recited by Thomas E. Woods Post #223, American Legion of Sumner. Visitation will be held at Becker-Milnes Funeral Home from 4:00 p.m. to 8:00 p.m. Wednesday, October 4th, and for one hour preceding services at the church on Thursday. A Rosary will be recited at 3:30 p.m. at the funeral home on Wednesday. Memorials may be made in his name to Immaculate Conception Catholic Church in Sumner.

Donald Cornelious, son of Edmund and Florence (Ludwig) Rader was born June 10, 1927, in Sumner. He was baptized and confirmed at Immaculate Conception Catholic Church in Sumner. Don received his education in the rural country schools of Sumner. He enlisted in the United States Army in 1951, and served during the Korean conflict until being honorably discharged in 1954. During his service, Don was stationed in Japan. On April 12, 1955, he was united in marriage with Pauline Seehase at Immaculate Conception Catholic Church. To this union five children were born, Diane, Donna, Elaine, Mark, and Gary. The couple farmed in the Sumner area for many years. Along with crop farming they also milked cows. In 1994, Don sold their cows but remained on the farm until moving to the Hillcrest Home in December of 2011. He was a life long member of Immaculate Conception Catholic Church in Sumner. Don enjoyed playing cards, attending neighborhood card clubs where they would play 500 and Schafkopf, he had an ability to fix anything (specifically clocks, he built a grandfather’s clock), and loved being outside working on things.

In addition to his parents, he was preceded in death by two brothers, Walter and Verlynn Rader; and one brother-in-law, Milton “Shorty” Meyer.