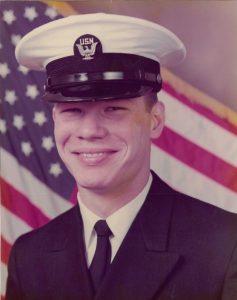 David Earl Wayne Sturtz entered the United States Navy on October 11, 1974, in Unknown, served during the Vietnam War era and reached the rank of Chief (SS) before being discharged on November 30, 1995 in Charleston, SC.

David Earl Wayne Sturtz is buried at Home in Waverly, Iowa and can be located at

David Earl Wayne Sturtz, 64, of Waverly, Iowa, and formerly from Waterloo, passed away on Saturday morning, April 27, 2019, at his home of natural causes.

Dave was born on March 19, 1955, in Waterloo, Iowa, the son of Shirley Elaine (Berg) and Wayne Roland Sturtz. Dave was raised in Waterloo where he attended school and graduated from Waterloo West High School in 1974. On November 12, 1977, Dave was united in marriage to Lynnette Potter in Waterloo, Iowa. On October 11, 1974, Dave entered the United States Navy. He participated in the Persian Gulf War and achieved the rank of Chief Petty Officer. He was honorably discharged on November 30, 1995. Dave then worked for John Deere Engine Works in Waterloo from 1997 until his retirement in July of 2017.

Dave was a member of UAW Local 838 and attended Crosspoint Church. As a child, he was a boy scout and never lost his passion for being outdoors camping and fly-fishing. He also enjoyed woodworking, amateur geology, taking long drives in his Mercedes Benz, and traveling to Florida to visit relatives. Most recently, Dave enjoyed time with his cats, Max and Simon, but nothing topped time spent with his family.

Dave is survived by his wife and companion of twenty-five years, Lynnette; three children, Nicholas (Kayla) Sturtz of Waterloo, Iowa, Elaina (Brian) Dalm of Bellaire, Texas, and Samuel (Samantha) Sturtz of Ankeny, Iowa; three grandchildren, Kenadie, Theodore, and Sienna; two sisters, Shawn Barnes of Waterloo, Iowa, and Kathleen (Sylvester) Sheriffe of Florida; one brother, Danny (Beverly) Sturtz of Des Moines; and several nieces and nephews. He was preceded in death by his parents.

Funeral services will be held at 12:00 p.m. on Saturday, May 4, 2019, at Kaiser-Corson Funeral Home in Waverly with Pastor Dwayne Potter officiating. Military Honors will be conducted by the Waverly Area Veterans Honor Guard. Visitation will be held one hour prior to the service on Saturday. In lieu of flowers, memorials may be directed to the family for later designation, and online condolences may be left at www.kaisercorson.com. Kaiser-Corson Funeral Home in Waverly is assisting the family.
319-352-1187