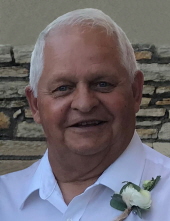 entered the United States Army on June 26, 1959, in Des Moines, IA, served during the Peacetime era and reached the rank of Private before being discharged on June 14, 1962 in Fort Hamilton, NY.

is buried at Grace Lutheran Cemetery in Tripoli, Iowa and can be located at

David Charles Bolte, 78, of Tripoli, Iowa, passed away on Tuesday, June 18, 2019, at the University of Iowa Hospitals and Clinics in Iowa City, Iowa from complications following a farm accident.

Dave was born on March 16, 1941, near Tripoli, Iowa, the son of LaVonna (Biermann) and Ralph Bolte Sr. He was baptized shortly after birth and confirmed in 1955 at St. John UCC- Siegel Church, rural Waverly. Dave attended country school and graduated from Tripoli High School in 1959. Immediately thereafter, Dave entered the United States Army. Serving in Special Forces, he was stationed in Germany and honorably discharged in 1962. On February 3, 1968, Dave was united in marriage to Charleen Shonka in Waverly, Iowa. The couple lived in the Tripoli area where they raised their family and farmed. Dave also worked as a welder at John Deere in Waterloo, retiring after thirty-eight years of service.

Dave was a member of Grace Lutheran Church in Tripoli. He enjoyed fishing, playing cards and spending time with friends and family.

Funeral services will be at 2:30 p.m. on Saturday, June 22, 2019, at Grace Lutheran Church in Tripoli with Pastor Darrel Gerrietts officiating. Military rites will be provided by the Tripoli VFW Post #4019. Daves body will be cremated after the funeral service with a private burial at a later date in Grace Lutheran Cemetery, Tripoli. Visitation will be on Friday, June 21, 2019, from 4:00 to 7:00 p.m. at Kaiser-Corson Funeral Home in Waverly and one hour prior to the service at the church on Saturday. In lieu of flowers, memorials may be directed to the University of Iowa Hospitals and Clinics or charity of donors choice. Online condolences may be left at www.kaisercorson.com. Kaiser-Corson Funeral Home in Waverly is assisting the family. 319-352-1187