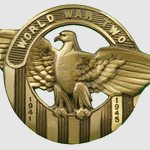 entered the United States Navy on September 10, 1941, in Des Moines, IA, served during the World War II era and reached the rank of Chief Shipfitter before being discharged on October 17, 1945 in Minneapolis, MN.

is buried at Harlington Cemetery in Waverly, Iowa and can be located at

Dave was born on September 1, 1919, in Whinthrop, Iowa, the son of William S. and Ida (Johnson) Hamilton. Dave graduated from the Winthrop High School in 1936, and then attended Iowa State College in Ames for 2 years. He worked for Hamilton Auto Body until he entered the U.S. Navy during WW II., on September 5, 1941. Dave served as a Hief Shipfitter until his discharge on October 17, 1945. Following the service Dave Made his home in Waterloo, Iowa, where he worked for Display Sign Service. On January 4, 1948 he was united in marriage to Velda L. Roever at St. Paul’s Lutheran Church in Waverly by Pastor Fangmeyer. He was baptized and confirmed on January 23, 1949 at St. Paul’s Lutheran Church in Waverly. Dave owned and operated Dave Hamilton Signs from 1949 until he sold the business in 1996.

Dave was a member of St. Paul’s Lutheran Church in Waverly, where he served as past chairman of the church council. He was also a former member of the Waverly City Council. Dave enjoyed Harley Motorcycles (owning three of them during the course of his life), enjoyed fishing and loved to spend time with his grandsons.

Funeral services will be held on Saturday, July 10, 1999 at 1:30 P.M. at St. Paul’s Lutheran Church in Waverly, with Pastor Kathy Hesterberg officiating. Burieal will be held in Harlington Cemetery in Waverly. Friends may call from 5:00 P.M. until 9:00 P.M. on Friday at 9:00 A.M. until 11:30 A.M. on Saturday at the Kaiser-Corson Funeral Home in Waverly and also for an hour before services at the church. Memorials may be directed to the family. A memorial fund will be established at a later date.