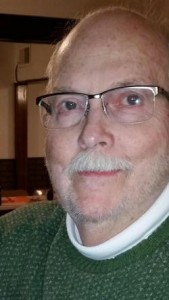 Aviation Storekeeper First Class David Aldean Neighbors was born on June 10, 1942 in Trenton, MO and died May 8, 2015 in Waterloo, IA.

David Aldean Neighbors is buried at Wilson Grove Cemetery in Sumner, Iowa and can be located at

David graduated from Trenton High School in Trenton, MO in 1961. He joined the US Navy in 1962. He retired in 1982 and moved his family to Sumner, IA, where he was an active member of the First Baptist Church.

Preceded in Death by: His parents, two sisters, and a son-in-law.

Funeral services will be held at 10:30 am on Thursday, May 14, 2015 at First Baptist Church in Sumner with Rev. Robert Burchfield officiating. Burial will follow in Wilson Grove Cemetery, rural Sumner with military honors from American Legion Thomas E Woods Post 223 of Sumner.

S.K. Rogers Funeral Home of Sumner is in charge of the arrangements.