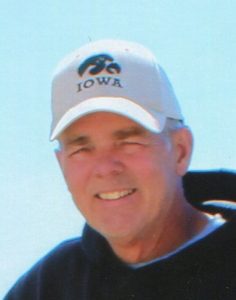 Daniel Scott Milnes entered the United States Air Force on January 10, 1989, in Des Moines, IA, served during the Persian Gulf era and reached the rank of Lieutenant Colonel before being discharged on June 30, 2008 in Randolph Air Force Base, TX.

Daniel Scott Milnes is buried at Union Mound Cemetery in Sumner, Iowa and can be located at

Daniel S. Milnes, 59, of Robins and formerly of Sumner, died unexpectedly on Sunday, August 7, 2016 at his son’s home in Rochester, Minnesota.

Funeral services will be held at 11:00 a.m. Friday, August 12, 2016 at the United Methodist Church in Sumner, Iowa with Rev. Mike Christie officiating. Interment will follow at the Union Mound Cemetery in Sumner with military rites by Thomas E. Woods Post #223, American Legion of Sumner. Friends may call from 4:00 p.m. to 7:00 p.m. Thursday, August 11th at Becker-Milnes Funeral Home in Sumner and for one hour preceding services at the church on Friday. Memorials may be given to the family to be designated to a charity of their choice at a later date.

Daniel Scott, son of John and Jane (Carter) Milnes was born January 9, 1957 in Centerville. He was baptized and confirmed at the United Methodist Church in Sumner. Dan received his education in the Sumner Schools graduating from Sumner High School in 1975. On June 7, 1980 he was united in marriage with Brenda Zell at St. Paul’s United Church of Christ, rural Sumner. To this union two children were born, Burke and Hillary Milnes. Dan enlisted in the United States Air Force in 1981. He started as an Airman in Minot, North Dakota. He received his commission in Sacramento, California and became a Second Lieutenant while serving as a hospital administrator in Mountain Home, Idaho. Dan served as a medical recruiter in Papillion, Nebraska and a Readiness Officer in Wichita Falls, Texas. While in San Antonio, Texas he worked at the Medical Headquarters. He served as a Squadron Commander in Columbus, Mississippi, and also in Phoenix, Arizona. Dan retired from the Air Force, after an honorable and long career as a Lt. Colonel in 2008. Upon retirement he worked as a Region Director at AmeriCorps N.C.C.C where he helped with community service and organizing teams to help with natural disaster relief. Dan enjoyed golfing, listening to Elvis music, antique cars, grilling, but most especially enjoyed time with his family.

He was preceded in death by his father, John Milnes.