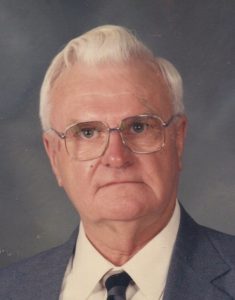 Dale Edward Lynch entered the United States Army on May 13, 1952, in Des Moines, IA, served during the Korean War era and reached the rank of Corporal before being discharged on April 22, 1954 in Fort Sheridan, IL.

Dale Edward Lynch is buried at St. Paul's United Church of Christ Cemetery in Sumner, Iowa and can be located at

Memorial services will be held 10:30 a.m. Wednesday, April 5, 2017, at Becker-Milnes Funeral Chapel in Sumner with Rev. Marilyn Sargent officiating. Inurnment will follow at St. Paul’s U.C.C Cemetery, rural Sumner. Visitation will be held from 5:00 p.m. to 7:00 p.m. at the funeral home on Tuesday.

Dale Edward, son of Edward and Minnie (Saathoff) Lynch, was born March 19, 1927, at Reinbeck, Iowa. He was baptized and received his first communion at Sacred Heart Catholic Church in Reinbeck. He graduated from Reinbeck High School in 1946, and from May of 1952 until April of 1954, served with the U.S. Army in Germany. On October 6, 1956, he was united in marriage with Velda Ferguson at St. Paul’s E&R Church of rural Sumner. Dale spent his entire working life driving semi and much of the time he owned and operated his own rig. Some of the firms he worked for included; Takin, Kroblin’s, Midwest Coast, CRST, Westside, Schanno, Transport America, Crystal Ice, Matson’s, Gray Transportation, and Latta’s. Dale did much of his own maintenance, fixed his grandchildren and great grandchildren’s toys, but most especially enjoyed the time he spent with those grand and great grandkids.

The family wishes to express Dale’s feelings that all should be comfortable wearing blue jeans to his service, if the wish.