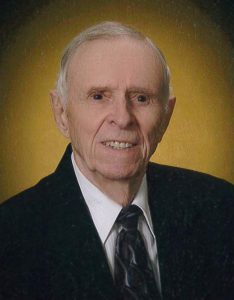 Dale Claude Jung entered the United States Marine Corps on August 20, 1942, in Waterloo, IA, served during the World War II era and reached the rank of TSGT before being discharged on February 5, 1946 in Great Lakes, IL.

Dale Claude Jung is buried at Harlington Cemetery in Waverly, Iowa and can be located at

Dale was born on January 1, 1924, in Waterloo, Iowa, the son of Ernest Claude and Zazel Annetta (Moss) Jung. He attended school in Waterloo, Iowa, and graduated from West High School in 1942. In August of 1942, Dale entered the Unites States Marine Corp. and served in the South Pacific Theatre until his honorable discharge in February of 1946.

On August 11, 1946, Dale was united in marriage to Donna Nadine Sommer in Waterloo, Iowa. The couple made their home in Waterloo, until relocating to Waverly in 1959. Dale worked as a Systems Research Analyst for CUNA Mutual Group. He retired on October 21, 1985.

Dale was a charter member of Redeemer Lutheran Church in Waverly, and an active member of the Waverly Lion’s Club and the American Legion. For fun, Dale enjoyed golfing, fishing, and spending time with family. He especially liked to deep sea fish while wintering in Corpus Christi, Texas, with Donna.

Celebration of Life services will be held on Friday, August 5, 2016, at 2:00 p.m. in Good Shepherd Chapel at Bartels Lutheran Retirement Community, with Pastor Paul Schaedig officiating. Burial will be held in Harlington Cemetery in Waverly, with Military Graveside Rites conducted by the Waverly Area Veterans Honor Guard. Visitation will be held from noon until 2:00 p.m. on Friday at Bartels Good Shepherd Chapel. Memorial may be directed to Bartels Lutheran Retirement Community. Online condolences may be left at www.kaisercorson.com. Kaiser-Corson Funeral Home in Waverly is assisting the family. 319-352-1187