Carl H. Bodeker entered the United States Army on September 4, 1917, in Waverly, IA, served during the World War I era and reached the rank of Private First Class before being discharged on August 4, 1919 in Camp Dodge, IA. 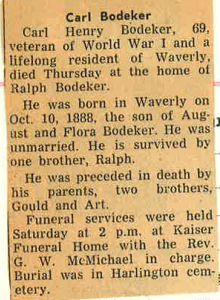 Carl Henry Bodeker, 69, veteran of World War I and a lifelong resident of Waverly, died Thursday at the home of Ralph Bodeker.

He was born in Waverly on Oct. 10, 1888, the son of August and Flora Bodeker. He was unmarried. He is survived by one brother, Ralph.

He was preceded in death by his parents, two brothers, Gould and Art.

Funeral services were held Saturday at 2 p.m. at Kaiser Funeral Home with the Rev. G. W. McMichael in charge. Burial was in Harlington cemetery.