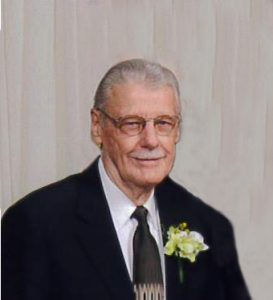 Bernard E. Mick entered the United States Navy on July 1, 1943, in Maryville, MO, served during the World War II era and reached the rank of Lieutenant Junior Grade before being discharged on September 6, 1946 in Great Lakes, IL.

Bernard E. Mick is buried at Harlington Cemetery in Waverly, Iowa and can be located at

Bernard “B.E.” Mick, 94, of Waverly, Iowa passed away on Thursday, August 30, 2018 at the University of Iowa Hospitals and Clinics in Iowa City, Iowa.

Bernard Eugene Mick was born on March 14, 1924 in Bussey, Iowa, the son of Fred Lyman and Sylvia L. (Olson) Mick. Bernie attended school and graduated in 1941 from Bussey High School. He then attended Simpson College in Indianola, Iowa for two years, followed by Northwest Missouri State, at Maryville, Missouri, in a Navy V12 unit. From there he was sent to Wellesly College in Massachusetts in a Navy Midshipman School. In September of 1944, he received his commission as an Ensign in the U.S. Navy Supply Corp., receiving orders to be Asst. Supply Officer on the U.S.S. Rigel AR 11, a repair ship. He went aboard ship on Thanksgiving 1944 in Hollandia, New Guinea and then moved up to Leyte Gulf in the Philippines. He spent 12 months there repairing landing craft that were damaged. At the end of WWII he spent six weeks in Manila and then returned to San Francisco. Following separation from the service in Sept. 1946, he attended the University of Iowa, graduating in 1947 with a B.S. in Commerce Degree.

On February 14, 1948 he was united in marriage to Patricia A. Wood in Diagonal, Iowa. He had met Patricia while at Simpson College.

Bernie became associated with Spurgeon Mercantile Co., a chain of ladies Jr. dept. stores in Iowa, Minnesota, Illinois, and Wisconsin. He trained in stores at Fairfield and Marshalltown, Ia., and managed stores in Albia, Ia. and Portage, Wis. In 1952 he became a buyer in Chicago, living in Skokie, IL., for 10 years. In 1962, Bernie and Pat purchased the Schlutsmeyer Ladies Dept. Store in Waverly. Over the years they expanded to other stores in Waverly including Patricia Fashion Fabrics, Elegant Woman, The Denim Patch, The Bridal Gallery and Home at Heart, as well as stores in Cedar Falls and New Hampton. The stores have always been a family business with all of the family involved. To date, only the original store, B.E. Mick’s in Waverly is operating. It has been purchased and is operated by Robert and Ruth.

Bernie was Cub Scout Master in Skokie, Il., and a member of the American Legion and Amvets. He was a Rotarian for over 40 years, serving as president from 1981 to 1982, and received the Paul Harris Fellow recognition. He served 20 years as Rotary Goodfellows Chairman. He was also director of the Corwin Co. in Kansas City, Mo. Locally, Bernie was an active member of St. Paul’s Lutheran Church, the Waverly Community Symphony, and a member for the Bremwood Lutheran Children’s Home. He also served as a member and director for the Waverly Chamber of Commerce and the Waverly Public Library. Bernie was a big sports fan, supporting the Waverly-Shell Rock Go Hawks, Iowa Hawkeyes, Wartburg Knights, and the St. Louis Cardinals.

Bernie was a proud service man, accomplished businessman, and a good citizen, however, his number one priority was his family. Above all, he enjoyed spending time with his wife, children, grandchildren and great-grandchildren.

Funeral services will be Thursday, September 6, 2018 at 11:00 a.m. at St. Paul’s Lutheran Church & School in Waverly with Pastor Arthur Bergren officiating. Burial will follow in Harlington Cemetery, Waverly with Military Rites conducted by Waverly Area Veterans Honor Guard. Visitation will be on Wednesday from 4:00 to 7:00 p.m. at the Kaiser-Corson Funeral Home, Waverly. Memorial may be directed to St. Paul’s Lutheran Church, Bartels Lutheran Retirement Community or Cedar Valley Hospice and onnline condolences for B.E. may be left at www.kaisercorson.com.