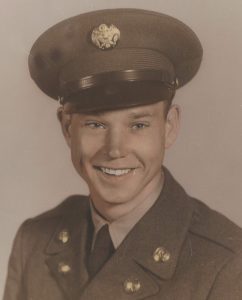 Bernard Dean Casebolt entered the United States Army on January 15, 1951, in Des Moines, IA, served during the Korean War era and reached the rank of Private First Class before being discharged on October 15, 1952 in Camp Atterbury, IN.

Bernard Dean Casebolt is buried at Harlington Cemetery in Waverly, Iowa and can be located at

Bernard Casebolt, 89, of Waverly and formerly of Melrose, passed away Wednesday, April 12, at the Clarksville Nursing and Rehabilitation Center.

He was born Aug. 18, 1927, to Raymond and Lula Willoughby Casebolt on the family farm near Melrose, where he was raised along with his 13 siblings. He attended country school and Moravia High School, where he played basketball and was part of the boxing club, graduating in 1946. He went on to Des Moines Technical Institute before beginning work in radio and television repair at Pyle TV in Russell.

A proud serviceman, he was inducted into the U.S. Army at Fort Leonard Wood, Mo., in 1951 and saw combat in the Korean War, earning commendations for his service. He was a lifelong member of the Melrose American Legion.

Upon his return from duty, he married his sweetheart, Patty Comer, on Dec. 31, 1955, at St. Patrick Catholic Church in Melrose. The couple lived briefly in Russell and then spent the next 45 years in Melrose before moving to Waverly to be near their daughter, Cindy, and her family.

He enjoyed a 33-year career at Johnson Machine Works in Chariton, beginning in the shop while gaining knowledge of machining and welding before spending 30 years as a production supervisor on projects that included bridges, locks and dams and flood control infrastructure.

A tireless volunteer, he was one of the founders of the Melrose Volunteer Fire Department, served on the parish board of St. Patrick Catholic Church and was a Melrose city councilman for many years. He also served on the Melrose Betterment Committee and worked on countless projects for his hometown. His labor of love was an exhaustive 10-year restoration of Evans Cemetery, a neglected graveyard and Civil War memorial that he recalled from his childhood. He was presented the Civil War Historical Award for his efforts, which culminated with the cemetery’s rededication on Memorial Day in 2000.

A kind and gentle man who spent much of his time helping others, he was honored for his giving spirit with induction into the Iowa Volunteer Hall of Fame in 1992. He also was named Iowan of the Day at the Iowa State Fair in 2000.

A self-taught carpenter, he had a passion for building grandfather clocks and made several among the countless woodworking projects he completed over the years for family and friends.

Services will be held at 11 a.m. on Tuesday, April 18, at Kaiser-Corson Funeral Home in Waverly. Burial will be in Harlington Cemetery, with military rites conducted by the Waverly Area Veterans Post Honor Guard. Visitation will be held at the funeral home from 4-7 p.m. on Monday, April 17, with a prayer service beginning at 7 p.m. Visitation also will be held for one hour prior to the celebration of life services, beginning at 10 a.m. on Tuesday, April 18. Memorials may be directed to the family. Online condolences for Bernard’s family may be left at www.kaisercorson.com. Kaiser-Corson Funeral Home in Waverly is assisting the family. 319-352-1187