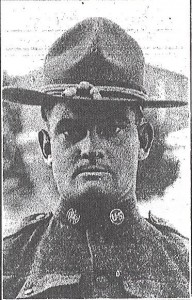 August W. Acker entered the United States Army on September 17, 1917, in Waverly, IA, served during the World War I era and reached the rank of Corporal before being discharged on October 1, 1918 in Camp Green, NC.

August W. Acker is buried at St. Peter's Lutheran in Denver, Iowa and can be located at

This was the first Denver boy to die in service.

Family lived on a farm 2 miles north Denver a brother Henry and Fred live in Denver. 3 sisters Mrs. Louisa Fortney, Mrs. Bertha Koepke and Miss Fern reside also in Denver vicinity.
Was a member of the Luthern Church, by vocation a farmer
His brother Henry (Known as Doc. Acker) is also a World War Vet.

CORPORAL AUGUST ACKER HAS ANSWERED LAST CALL.
Early last week word was received by his parents that Corporal August Acker, of Jefferson township, was seriously ill at Camp Greene, N. C., and on Tuesday a message came stating that he had passed away that day.
August Julius Acker, second son of Mr. and Mrs. Fred Acker, was born August 27, 1893, in Jefferson township, and was therefore about 25 years of age at the time of his death. In his early days he was very delicate and inclined to sickness, and at one time suffered a slight stroke of paralysis of his right side, but later grew stronger and devoted himself to work on the farm. Last year in September he left parents, brothers and sisters, and joined the army. From Camp Dodge he was transferred to Camp Pike, and later to Camp Greene, N. C. He was proud of being able to serve his country. Failing to pass the strict physical examination for overseas duty, he decided not to return home, but to remain in service in this country. About six weeks ago his parents were informed of his illness, but his condition did not seem serious. The news of his death, therefore, was a great shock to them.
The deceased leaves to mourn his loss, his parents, his brother Henry, who is with the American Expeditionary Forces, and another brother, Fred who is at home; three sisters, Mrs. Lora Fortney, Mrs. Bertha Koepke and Miss Fern Acker; also his grandparents, Mr. and Mrs. George Acker and Mrs. Parlee Meeker.
The funeral was held from the home on Sunday afternoon at 2 o’clock, Rev. Schoenbohm officiating, and burial was in St. Peter’s cemetery.