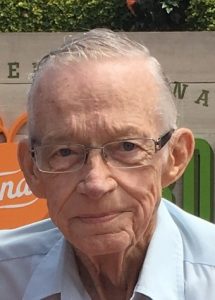 Arnold Herman Jurgensen served again in the United States Navy and reached the rank of Machinist Mate Second Class before being discharged May 24, 1968 in USS Oriskany, San Francisco, CA.

Machinist Mate Second Class Arnold Herman Jurgensen is buried at St. John Lutheran Cemetery in Sumner, Iowa and can be located at

Arnold H. Jurgensen, 76, of Sumner, died Tuesday, May 30, 2017, Community Memorial Hospital in Sumner after a courageous battle with cancer.

Arnold Herman, son of Herman and Adela (Schroder) Jurgensen was born August 13, 1940, in Andrew, Iowa. He received his early education in the Andrew Schools prior to the family moving to Sumner in the early 1950’s. Arnold continued his education in the Sumner Schools graduating from Sumner High School in 1958. He continued his education at Upper Iowa University in Fayette. Arnold honorably served in the United States Navy from 1960 prior to being honorably discharged in 1968. On May 28, 1968, he was united in marriage with Morie Iha in Galena, Illinois. The couple made their home in Sumner. Arnold worked at John Deere & Company for twenty-six years and Nestle for ten years. He enjoyed gardening, flowers, fishing, hunting, and photography.

He was preceded in death by his parents; two brothers, Lyle and Roger Jurgensen; and one great-granddaughter, Mariah Wright.

The family would like to thank the first responders at SEMS, the employees at Community Memorial Hospital in Sumner, and Unity-Point Hospice for their professional and wonderful care they provided for Arnold and his family during this difficult time.