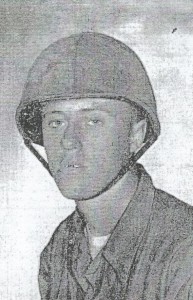 Allen James Avery entered the United States Marine Corps on December 31, 1964, in Unknown, served during the Vietnam War era and reached the rank of Private First Class before being discharged on February 14, 1966 in Quang Nam Province, South Vietnam.

Allen James Avery is buried at Union Mound in Sumner, Iowa and can be located at yet to be determined

First Vit Nam veteran to be killed in action from Bremer County Iowa.

Les Teeling, coach of the Midget baseball team, said that the scorekeeper had failed to note a change in pitchers for the Sumner-West Union game, won by the Sumner team, 9-5. Actually it was Allen Avery that pitched after the first inning and was credited with the victory. Leon Borcherding had started for the Sumner team.

The second semester Typerwriting Honor Roll of the Sumner High School was announced this past week by Mr. James Lahmann, instructor. Typing II students recognized for their performance on the one-minute timed tests are David DeHaven (74), Marlene Cross (66), Allen Avery (64), Richard Herrmann (58), and Dan Meyer (58). These scores are based on the Net Words Per Minute rate in which ten words are subtracted for each error committed.

Mr. and Mrs. Lloyd Avery have received a letter from their son Pfc. Allen Avery, stating he had suffered a hand injury, which resulted in a broken finger and two other fingers smashed. He did not state how the accident happened. He is stationed with the U. S. Marine Corps in Viet Nam. The Averys have received a letter from John Culver, with the Committee on Foreign Affairs, stating he had visited with Pfc. Avery.

SUMNER (Special) – Mr. and Mrs. Floyd Avery, Sumner, have received word of the death of their son Allen, 19, a victim of a land mine in war action in Viet Nam.

The Sumner residents received word Monday night from Armed Forces officials reporting young Avery’s death Feb. 14. Allen suffered multiple, extreme burns over his entire body. According to the report, the soldier was riding a tractor when the vehicle hit a land mine.

His body will be returned [to] Sumner for burial.

Avery was born Nov. 23, 1946 at Sumner. He is survived by his parents, a brother, Terry, and his grandparents, Mr. and Mrs. Earl Avery, Sumner. He was serving with the armed forces in the Viet Nam conflict.

First serviceman from this area to die in action

Private First Class Allen J. Avery, 19, of the United States Marine Corps, became the first Sumner serviceman to die in action in Viet Nam when the amphibious vehicle in which he was riding Monday, struck a land mine.

The Am-trac apparently burst into flame. Pfc. Avery’s death was attributed to severe burns received over much of his body.

In a telegram to his parents, Mr. and Mrs. Lloyd Avery of 409 West Fourth St., Sumner, Wallace McGreen, Commanding General of the U. S. Marine Corps confirmed Pvt. Avery’s death.

General McGreen stated: “I deeply regret to confirm that your son, Pvt. 1c Allen J. Avery, USMC, died, Feb. 14, 1966, in the vicinity of Da Nang Republic of Viet Nam. He sustained multiple extreme burns on the entire body when the amphibious tractor he was riding in detonated a mine”.

Mr. and Mrs. Avery had been notified of their son’s death Tuesday night by Major William C. Frank, USMC, of the Marine Corps Recruiting office at Waterloo.

Pfc Avery had been stationed in Viet Nam since June, 1965.

He enlisted in the U. S. Marine Corps on Dec. 31, 1964 and received his boot and combat training at Camp Pendleton, near San Diego, Calif.

In January, 1966, Pfc. Avery was assigned to line duty and at the time of his death was serving with “C” (Charley) Company, 1st Battalion of the 3rd Marines. He was a rifleman.

Although complete details of the action in which he died and the exact locale of the incident have not been revealed, a paragraph in the Tuesday, Jan. 14, edition of the Des Moines Daily Register, in a general article on the Viet Nam action, apparently refers to the incident.

It states: “A U. S. Marine amphibious vehicle moving up a highway seven miles northwest of Da Nang hit a mine, inflicting moderate casualties on those on board, a U. S. spokesman said. The vehicle was leading a column carrying elements of two Marine companies”.

In a letter to his parents, dated Feb. 9, 1966 and received here Wednesday, Feb. 16, Pfc. Avery described an incident that had occurred a few days earlier, in which he had a close call.

During this particular engagement, his unit was in the field for six days and seven nights, Pfc. Avery said. “The fourth night we were all just starting to sit in on top of a hill “785” and were all starting to eat our rations and just like that an automatic opened up on us and the guy right next to me, about two or three feet away . . . just like that . . . he fell over dead. I was looking at him lying there beside me, but I lucked out and hit the deck and they (the VC) didn’t get me. So I guess the Lord was beside me. At least I know somebody was there.

“I sure can’t wait ’till I go home and get out of this outfit. I have five and a half months left and then it’s my time to come home”.

Pfc. Avery’s body will be returned to Sumner for burial. Mr. and Mrs. Avery said Wednesday they were expecting a call on that day with information on when their son’s body will arrive here.

Allen James Avery was born Nov. 23, 1946 at Sumner. He attended the Sumner schools and was active in sports, particularly in baseball. He enlisted in the Marine Corps while still in school.

He was preceded in death by his maternal grandparents, Mr. and Mrs. Otto Zummack.

Final Rites At Sumner For Marine

SUMNER–Funeral services were held here Tuesday, Feb. 22, for Pfc. Allen James Avery, 19, first serviceman from this area to be killed in action in South Viet Nam.

Pfc. Avery was serving with a Marine detachment in the vicinity of Da Nang Province on February 14 and died of multiple extreme burns over his entire body, received when the amphibious vehicle he was riding detonated a land mine.

Pfc. Avery was a student at Sumner high school when he enlisted in the Marine Corps December 31, 1964. He received boot and combat training at Camp Pendleton, San Diego, Calif. He went to Viet Nam in June of 1965.

In January he was assigned to line duty and at the time of his death was serving with C Company, 1st Battalion of the Third Marines as a rifleman.

He was the son of Lloyd and Helen Avery and was born at Sumner on November 28, 1946. Survivors are his parents, a brother, Terry, 8, grandparents, Mr. and Mrs. Earl Avery, Sumner.

He was preceded by his maternal grandparents, Mr. and Mrs. Otto Zummak.

Mrs. Lloyd Avery of Sumner and Major William C. Frank of the United States Marine Corps, hold the Purple Heart Medal, awarded posthumously here Monday to the Avery’s son, Marine Private First Class, Allen Avery. Pfc. Avery, the only Sumner serviceman to die in action in Viet Nam, was killed on Feb. 14, 1966, when the Am-trac vehicle in which he was riding struck a land mine. Major Frank, the Inspector-Instructor of the U. S. Marine Corps Reserve Unit at Waterloo, presented the award at the Avery home. After the presentation he told Mr. and Mrs. Avery that the award was one of the most highly respected and probably the most beautiful of all military medals. The Avery’s also received the National Defense Service Medal, also awarded posthumously to Pfc. Avery.

Two Medals have been awarded posthumously by the South Vietnamese government to the late Marine Pfc. Allen Avery, who was killed Feb. 14, 1966 when the am-track in which he was riding struck a land mine.

One of the Medals is the “Military Merit Medal” and the other the “Gallantry Cross with Palm”.

Courageous combatants, well known for their sacrifices, who always exhibited a spirit of good will and cooperation. They assisted the Republic of Vietnam Armored Forces in blocking the Red Wave of aggression from engulfing South Vietnam and Southeast Asia. With their enthusiasm and exemplary devoted manner, they willingly executed all of their entrusted missions and set a brilliant example for their comrades-in-arms.

They died in the performance of their missions. Their losses have been greatly mourned by both their American and Vietnamese comrades-in-arms.

Although there was no specific indication as to what the Gallantry Cross with Palm was awarded for, it is possibly a companion Medal to the Military Merit Medal.

He is the son of Mr. and Mrs. Lloyd Avery of Sumner.

The two most recent Medals were forwarded here through the office of Wallace M. Greene, Jr., General, U. S. Marine Corps, Commandant of the Marine Corps.

SUMNER — Major William C. Frank of the Marine Corps. has presented the Purple Heart Medal to Mr. and Mrs. Lloyd Avery. The award was given posthumously to their son Pfc. Allen Avery, who was killed February 14, 1966, in Viet Nam when the vehicle in which he was riding struck a land mine. The Averys received the National Defense Service Medal, also awarded posthumously.

The Military Merit Medal is awarded or posthumously awarded to Non-Commissioned Officers (including Aspirants) and Enlisted Men in the Armed Forces, who have:

– Previously received citations at the Armed Forces level.
– Been wounded one or many times in combat.
– Distinguished themselves by their heroic actions.
– Served in an honorable manner for at least 13 years.

The Military Merit Medal may be awarded or posthumously awarded to Allied Non-Commissioned Officers and Enlisted Men for valor while fighting in the Republic of Vietnam.

The Military Merit Medal may also be presented to Chiefs of State, Marshals of friendly countries and General Officers who have held a position as Commander In-Chief in the Republic of Vietnam.

The Military Merit Medal has only one class.

– The Minister of National Defense.
-The Chief of Joint General Staff, RVNAF, is empowered to posthumously award the Military Merit Medal.