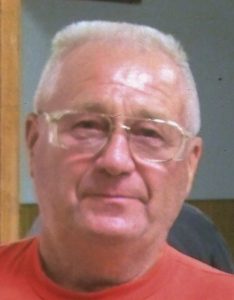 entered the United States Army on July 12, 1962, in Des Moines, IA, served during the Peacetime era and reached the rank of Private First Class before being discharged on June 26, 1964 in Fort Leonard Wood, MO.

is buried at St. John's Lutheran Cemetery in Sumner, Iowa and can be located at

Funeral services will be held 1:00 p.m. Saturday, August 27, 2016, at the American Legion Hall in Sumner. Interment will follow at St. John Lutheran Cemetery in Sumner with military rites by Thomas E. Woods Post #223, American Legion of Sumner. Visitation will be from 5:00 to 8:00 p.m. Friday, August 26th at Becker-Milnes Funeral Home in Sumner and for one hour preceding services at the Legion Hall on Saturday. In lieu of flowers, memorials may be given to the family for designation to be made later.

Albert Sydney, son of Sydney and Leona (Edgar) Gott was born August 13, 1939 in Chickasaw County. He received his education in the Sumner Schools. Albert served in the U.S. Army during the Korean Conflict from 1962 until being honorably discharged in 1964. On April 30, 1967 he was united in marriage to Lois Pries at St. John Lutheran Church in Sumner. Albert farmed in the Sumner area for many years, hauled canned milk, and has worked at Featherlite Trailers for the last twenty three years. He was a long time member of the Union United Methodist Church, rural Sumner and Thomas E. Woods Post #223, American Legion of Sumner. Albert loved being around his grandchildren, enjoyed fixing things around the farm, working on farm equipment, collecting memorabilia and going to auctions.

In addition to his parents, he was preceded in death by three sisters.

The family encourages all of those able to attend to wear red or black.