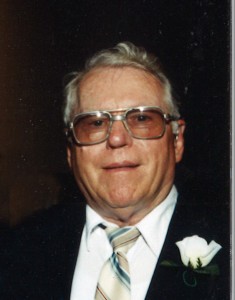 Albert Marvin Dana entered the United States Navy on April 6, 1945, in Waterloo, IA, served during the World War II era and reached the rank of Seaman First Class before being discharged on August 3, 1946 in Minneapolis, MN.

Albert Marvin Dana is buried at Harlington Cemetery in Waverly, Iowa and can be located at

Albert Marvin Dana, 88, of Waverly, Iowa, died on Monday, May 11, 2015, at the Bartels Lutheran Retirement Community in Waverly from complications of Dementia.

Albert was born on February 22, 1927, in Pennington County, South Dakota, the son of Orin and Maude (Campbell) Dana. The family moved to Iowa, where he attended the Fredericksburg School System. Following his schooling, Al entered the U.S. Navy on April 6, 1945 and was honorably discharged on August 3, 1946, as Seaman First Class. Al returned home and on January 28, 1949, he was united in marriage to Darline Pearl Sievers in Tripoli, Iowa, by Rev. A. C. Woodcock. The couple made their home in St. Paul, Minnesota, where Al worked on the Railroad. Later the family moved to Whitewood, South Dakota, where Al became a Journeyman Electrician with the Local 1250 I.B.E.W. in Rapid City, South Dakota. In 1968, the family moved to Waverly, and Al continued his work as an electrician with the Local # 288 I.B.E.W. in Waterloo. In 1976, Al and Darline moved to Lansing, Iowa, where they truly loved their time spent on the river. In 2011, they moved back to Waverly and on January 14, 2012, they became residents of the Bartels Lutheran Retirement Community. Darline died on January 26, 2015.

Al was a member of the American Legion Post #176 and a member of the I.B.E.W. local #288 of Waterloo. In his spare time Al enjoyed fishing, bowling, hunting and trapping. But what gave Al the most joy was spending time with his family and friends and he dearly loved teasing Darline.

Funeral services will be held on Friday, May 15, 2015 at 11:00 a.m. at the Good Shepherd Chapel at Bartels Lutheran Retirement Community in Waverly, with Rev. Allen Bidne officiating. Burial will be in Harlington Cemetery, Waverly, with military graveside rites conducted by the Waverly Area Veterans Honor Guard. Public visitation will be held on Thursday, May 14th from 5:30 p.m. until 7:30 p.m. at the Kaiser-Corson Funeral Home in Waverly and also for an hour prior to services on Friday at the Good Shepherd Chapel. Memorials may be directed to Alzheimer’s research. Online condolences for Al’s family may be left at www.kaisercorson.com 319-352-1187. Kaiser-Corson Funeral Home in Waverly is assisting the family. – See more at: http://www.kaisercorson.com/obituary/Albert-Marvin-Dana/Waverly-IA/1507512#sthash.p3F4FU1u.dpuf