Neal concentrated on the need for more oversight with county veterans affairs offices considering the wide range of standards that the agencies employ. He and Brent also discussed Rally Point Cedar Valley Veterans and the work they are doing to keep the Cedar Valley free of homeless veterans. After the meeting had adjourned, several of our legislatures had multiple questions and thanked Bremer County Veterans Affairs and Rally Point Cedar Valley Veterans for the work they are doing for our state’s veterans. 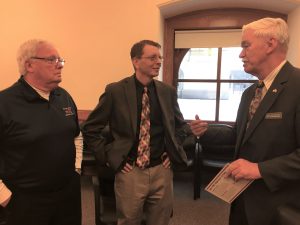 face with Representative Salmon to address numerous issues concerning county veterans affairs offices, during which other Representatives from the House congratulated them on the work we are doing.

When Brent and Neal returned, Neal discovered multiple emails from House members and a request for additional information to share with the entire caucus. Additionally, they recommended a follow-up visit to share our plight with more of our state’s leaders.

Representative Salmon, we would like to thank you for your invitation to address the House Committee on Veterans Affairs and your willingness to hear us out. We look forward to working with you during your continued tenure!!!